You’re at a party and everyone’s having the time of their lives – drinking, dancing, eating. Soon enough, it’s time for the best part of the night. Yep, time for that gloriously rich and succulent mud cake, topped with chocolate swirls and chocolate-dipped strawberries. Chocolate, chocolate, and more chocolate – doesn’t get any better than that, right? Well, unfortunately, that’s not quite the case for approximately 65% of the world’s population who are, to some degree, lactose intolerant.

What Is Lactose Intolerance?

Lactose intolerance is characterized by the inability to completely digest the sugar found in dairy products, called lactose.

Lactose is a disaccharide made up of two sugar units, glucose and galactose.

To be absorbed in the small intestine, lactose must be hydrolysed into individual sugar units (glucose and galactose) by the enzyme, lactase.

The inability to digest lactose is most often caused by the body’s deficiency in the lactose-digesting enzyme called lactase.

In rarer circumstances, an individual can develop an intolerance to lactose due to damage to the small intestine, known as secondary lactose intolerance. This is often seen in those with undiagnosed coeliac disease, inflammatory bowel disease, or even after a bout of an infection such as gastroenteritis. This type of lactose intolerance often disappears once the underlying problem is eradicated.

What Are the Symptoms?

Firstly, let’s explain the science behind why the particular (and very unpleasant) symptoms behind this intolerance occur.

When a person consumes dairy, lactase is released from the small intestine to break down the galactose and glucose into their separate monosaccharide components. In a person with lactose intolerance, the lack of lactase in the body results in lactose passing through the small intestine undigested and unabsorbed, leaving it to be fermented by the bacteria making a home for themselves in your large intestine and causing those awful symptoms.

Common symptoms include abdominal cramps, bloating, gas, rumbling in the lower abdomen, diarrhoea – and a less commonly spoken about symptom, nausea – that occur 30 minutes to 2 hours after the consumption of dairy.

So I Think I May Be Lactose Intolerant – How Do I Find Out?

Even though you may be adamant that you absolutely, 100% do not get along with dairy whatsoever, it is always best to get it officially diagnosed by a health professional to rule out any potential underlying problems.

A hydrogen methane breath test is a common, non-invasive way to diagnose lactose intolerance (and other intolerances too). Simply all you need to do is drink a cup of lactose solution and breathe into a machine every half an hour for approximately three hours. If there is a significant increase in the amount of hydrogen or methane your body produces after consuming the lactose drink, and you begin to feel those terribly distinct symptoms you know all too well, you will be diagnosed with being lactose intolerant.

Other forms of diagnosis include blood tests, elimination diets and stool tests.

Okay, I Now Know I’m Lactose Intolerant – Does That Mean No More Dairy, Ever?

Being lactose intolerant absolutely does not mean you have to eliminate all dairy from your diet. “Intolerant” and “allergic” are not synonymous, and even a lactase-deficient body are still able to produce some lactase, meaning you don’t have to shy away from that little bit of ice-cream on a scorching hot day.

Lactose intolerance varies for everyone, and some people can handle more dairy than others – it’s all about finding out what works best for you and your health.

The standard threshold that most people with lactose intolerance can handle without symptoms is roughly 3g in one sitting. The image below puts this into context. 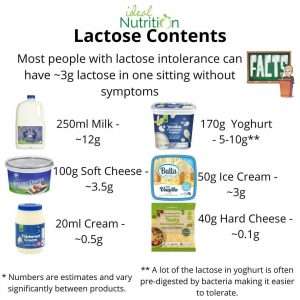 Some dairy foods, such as hard cheeses, contain little to no lactose and can be enjoyed without the fear of facing those dreaded symptoms later on.

Yoghurts are another dairy food that may not need to be feared, as the probiotics found in yoghurt do some of that lactose-digesting for you, so your body doesn’t have to. For a lot of people, this can translate to having a small serve of yoghurt without symptoms, although it will still likely cause symptoms if larger amounts are consumed.

Other Strategies That Can Help

Eating smaller amounts of dairy throughout the day rather than having an all-in-one-hit kind of approach is also a great way of still being able to enjoy the benefits of the nutritional properties of dairy minus the usual consequences.

Another strategy that can help involves also mixing in lactose-containing foods with other foods. Having more total food, while keeping the lactose content the same can help reduce the symptoms.

On that theme, if the fat content of a meal is higher, it can slow down digestion which allows the lactase enzymes slightly longer to their job, which can help reduce symptoms. Based on this, contrary to popular opinion, full-cream milk is often tolerated better than skim milk, if the same total volume is consumed.

Fortunately, the prevalence of lactose intolerance has brought about countless alternatives to regular dairy products to manage it.

Lactose-free products such as milk, ice creams and yoghurts can be an absolute lifesaver. Typically they taste very similar to their counterparts since the only difference is that the lactose has been broken down.

That being said, some people would argue that they are slightly sweeter, since the lactose is broken down into galactose and glucose (which make lactose when combined together.

Beyond that, the only other difference is that they often have a slightly higher price tag, partially due to the cost and effort involved in removing the lactose from these products.

Due to the difference in price, it can be worthwhile keeping in mind that some dairy products such as hard cheeses like mozzarella and cheddar have minimal lactose. Often lactose-free versions exist, but you do not necessarily need to choose the lactose-free version.

Lactase tablets can be taken before eating dairy and once consumed, allow you to completely forget that you were ever lactose intolerant. These tiny lifesavers are loaded with the enzyme lactase, and allow you to enjoy any kind of dairy you can imagine.

Lactase tablets can be a game-changer since they can allow you to include any lactose-containing food you desire and it means you do not have to miss out on anything.

Understanding how lactose intolerance works can make it much easier to manage. By utilising a combination of these strategies, you should be able to avoid symptoms without feeling like you are making any noticeable sacrifices.

FODMAPs, Fruit, and IBS
Can You Have Oats if You Have Coeliac Disease?
What Is IBS, and How Do We Manage It? Victoria Lekkas is a Bachelor of Applied Science/Masters of Dietetic Practice student at La Trobe University completing the second year of her four-year long journey to becoming an accredited practicing dietitian. Growing up in a Greek family, Victoria is passionate about the Mediterranean diet and issues surrounding gut health, intolerances and helping people achieve their optimal level of health. She is currently exploring all aspects of nutrition and dietetics and discovering where her skills and passions lie, and hopes to one day open her own private practice.